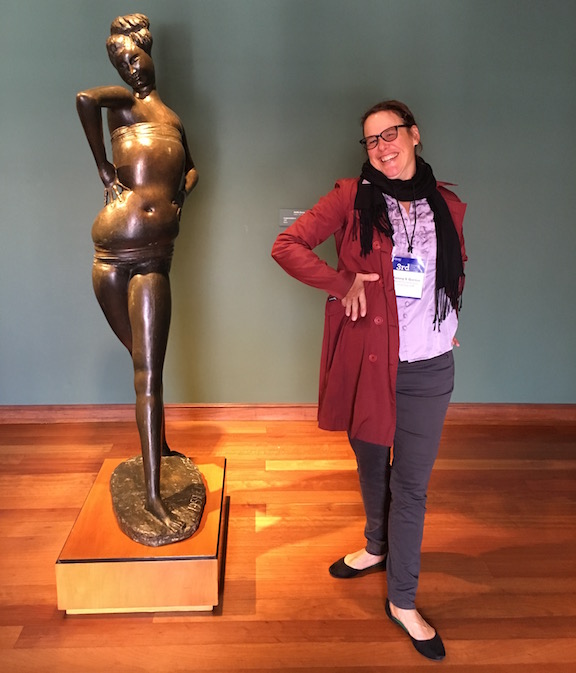 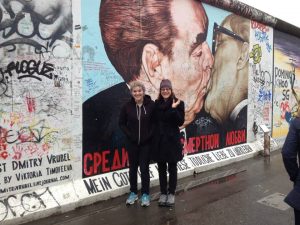 Tammy and daughter at the Eastside Gallery of the Berlin Wall, what used to be an international symbol of bad walls, but now a place for art.

When I worked at the Michigan State University Museum in the late 90s and early 00s, our director, a savvy guy, often spoke of a museum without walls. We all understood this as many did at the time as a term for an organization that was active in our communities, one that went beyond the traditional building-centered focus of the museum of the 20th century and earlier. It was a lofty goal, this outward-facing institution, and we all agreed heartily that our museum should be an active player in positive social, cultural, and economic changes.

That being said, I was in the Exhibits Division, and we felt slightly annoyed by the saying because we needed walls to make exhibits. We certainly couldn’t just hang a painting in the air, now could we? A wall case hung on nothing would be pretty unsupported, wouldn’t it? Why was everyone after our walls?!

This tension returned to me as a student of digital public history at the Doing Digital History 2016 summer school, led by the smart, indefatigable, and heroic Sharon Leon and Sheila Brennan at George Mason University. Yesterday, we learned about a program that allows us to annotate any web site (Hypothes.is, if you’re wondering). Today, we critiqued digital history projects in terms of their content strategy (I was assigned Remembering Lincoln, to which I gave two thumbs up.)

In the middle of this, I received an e-mail that INDY Week, a newspaper in my town of Raleigh, North Carolina, had published a story on my own online project, a community curated set of materials reflecting individuals’ experiences of North Carolina’s House Bill 2, a bill commonly referred to as the “bathroom bill” because it forces transgender folks to use the bathroom that corresponds to the sex listed on their birth certificates. It also includes limits on local cities’ abilities to  make their own laws in regard to wages and other key equity issues. Initially, it also took away citizens’ abilities to sue for discrimination in state courts, an ability later returned in a more limited form. The law had the effect of unleashing a great deal of transphobia as well as activism.

I started NC HB2: A Citizens’ History shortly after the governor signed the bill into law as a way for North Carolinians and others to share their experiences, especially with future historians.

My heart rate had increased the moment I learned about Hypothes.is, and I immediately started checking contributions to A Citizens’ History to make sure that other citizens had not annotated hateful things onto the evidence of the experiences of their neighbors. I spent an afternoon and a night wishing this museum without walls had walls. Isn’t this access what we had dreamed about when the web was young and museums were changing for the better? But now that we had the means to break down walls, I had to wonder if I had I simply created another way in which people could scream at one another. People trusted this project with their photos, stories, and videos, and I felt powerless to keep that trust. Why didn’t I know about this annotation before? How could I stop the meanness I have witnessed first hand on this issue?

Two things arrested my panic. First, the INDY Week story came out, and the reporter had captured my intentions so well that I felt a huge relief in being understood in North Carolina. My fellow North Carolinians at Doing Digital History 16 offered understanding as well. Second, we focused on learning Omeka, the software that powers A Citizens’ History and many other online exhibitions, including some brilliant community-curated ones (yes, I’m talking to you Preserve the Baltimore Uprising!), and the Center for History and New Media wizards answered the questions I’ve been dying to ask since April. I felt fortified by the skill-building and new knowledge, for as a professional with experience, I realized I had the guidance of my field no matter how people choose to use the product of my labor. Sharon Leon offered these words of wisdom: “Once we put it out there, we can’t control much.” There it was. A wall to keep out ideas is nothing more than an illusory feeling of control for the one building that wall. Let’s just know this and get back to work.

I’ll stop freaking out about walls if you will. Seems like it’s better for all to have fewer of them. Unless you need to hang lots of paintings, spray some kickin’ graffiti, do some parkour, then go find yourself a wall and be you.